DON’T DO YOUR BLOCK 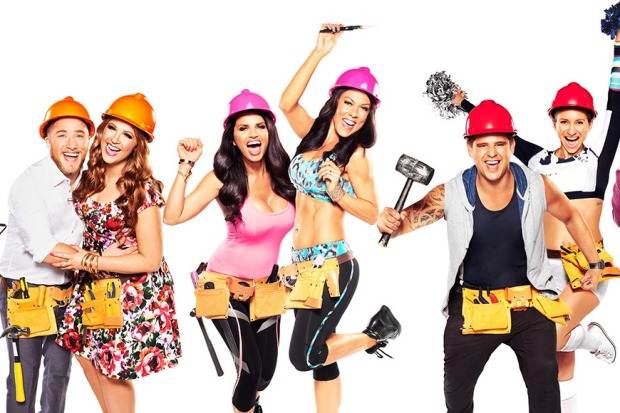 It started out so innocently with the best of intentions. It ended with at least one relationship breaking up, an impromptu nude photo shoot on a yacht and a very public breakdown.

Sounds exhausting. And it has been. Watching this season of The Block, where contestants have been slogging it out on and off screen, turning an ugly octagon-shaped former motel into a modern apartment building in Melbourne’s stylish South Yarra has felt like an emotional marathon. But in the real world, renovating and styling your own home shouldn’t be as hard as they managed to make it look.

st to admit I am a fan of The Block. I’ve been watching the Channel Nine reality show since it launched at a small block of flats in Bondi more than 10 years ago.

It’s escapism. It’s fun. And it’s inspiring seeing real people get stuck into a job that starts out being beyond many of the contestants. For some, it ends up that way. But others have a knack for working under pressure and picking up skills along the way that help them deliver attractive properties in a very short space of time.

Over the years it’s grown to be something so much bigger than a little show about renovating. The Block is a ratings staple for the Nine Network, with two series each year delivering solid ratings across the week. It’s made host Scott Cam a bona fide TV star, with a Gold Logie to boot.

And I take my hats off to the blockheads for giving it everything. Most of this season’s contestants have created some really great spaces, despite the limitations of the weirdly shaped rooms and angled walls.

The thing is, it’s not reality. Let’s remember that this is a major TV production with celebrity judges, hundreds of tradies working off-screen to meet ridiculous deadlines and properties stuffed with unnecessary extras and styled to sell way above their reserve.

So here are a few tips for keeping it real and relaxed when you tackle your reno at home.

Find your style. Pinterest, Instagram and Houzz are a renovator’s best friend. Do your research and discover looks you love (and hate). Styling your home is a much easier task when you’re armed with an arsenal of inspiration and reference material.

Take your time. Unlike The Block, in real life you don’t need to buy everything for your home in one frantic shopping session. The best interiors are built-up and layered over time, and crucially, have pieces from a variety of retailers. You don’t want your lounge room to look like it’s straight out of a catalogue!

It’s a real mood killer. You don’t want to fill every corner al la your Nan’s buffet and china cabinet. To show your home in its best light, pick just a few of your favourite homewares to display. Store any extras and rotate them a few times a year for a fresh look.

The Block isn’t totally divorced from reality. The show has given us an insight into Australia’s booming property market, which exploded in front of our eyes when Dea and Darren Jolly made $835,000 profit on their apartment earlier this year and broke the record for the biggest win on the show. Just desserts for this couple who famously had their chic property passed in at auction (during last year’s Glasshouse series) and sold after the show for just $10,000 profit. Ouch.

As this year’s blockheads begin to recover from their 10-week renovation nightmare, you can feel safe in the knowledge that creating your dream home doesn’t have to be the stressful experience we’ve seen on TV. It should be fun and doesn’t have to end in a striptease on a yacht, unless that floats your boat.