Foreman Dan Reilly on design and drama on The Block 2021 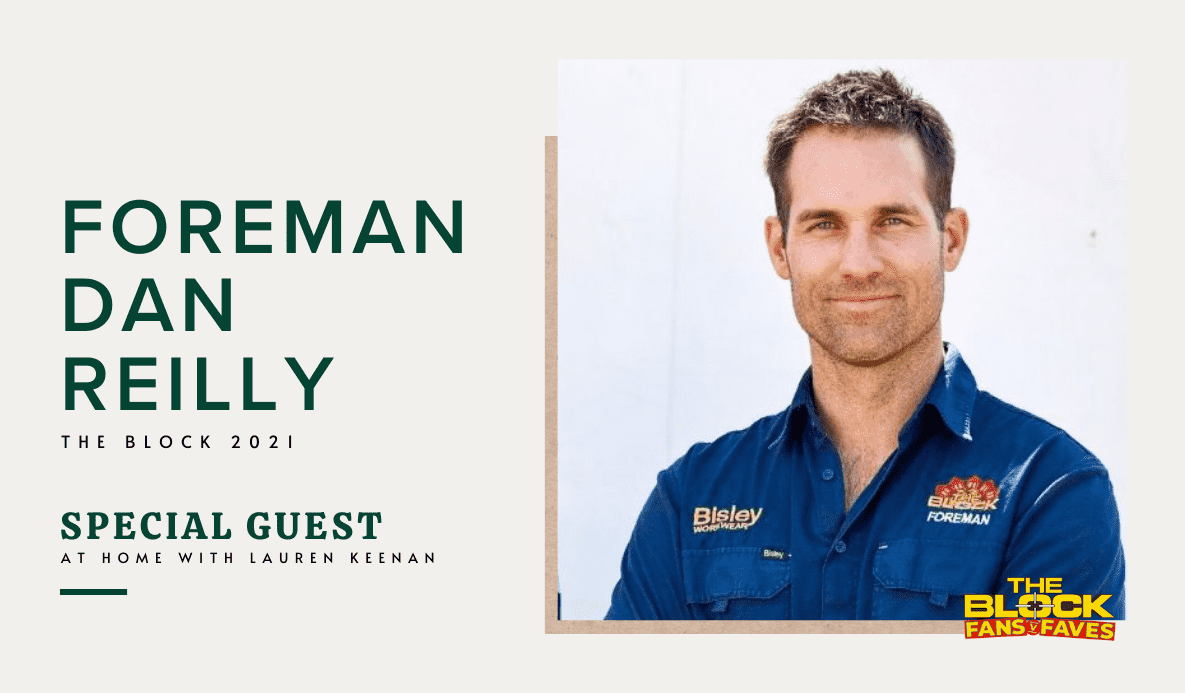 Foreman Dan Reilly has a front row seat as we approach the business end of The Block on Channel Nine. It’s one of the biggest building and renovation TV shows on the planet and it has delivered on design and drama in spades in 2021.

Dan Reilly joined the show as a contestant with his partner Dani back in 2012. And they returned again the following year for the first ever All Stars series of The Block. Dan is a key member of the cast and has some great insights into the properties on The Block and the high building standards they reach.

So it was a pleasure to speak to Foreman Dan Reilly on the show which you can listen to here or stream ‘At Home with Lauren Keenan’ wherever you get your podcasts.

While he began his working life as a carpenter, Reilly is now a qualified builder and that has brought about plenty of opportunities in business and on TV.

Dan and his wife Dani were married after their second appearance on the show in 2013 and set up their own full-service home design and construction business Red Door Project.

And Dan was brought in as a second foreman to assist ‘The Blockinator’ Keith with inspections and site coordination and management. It’s a big job and keeps them both very busy. Now it is pretty hard to imagine The Block without him as part of the ensemble of hosts along with Shelley Craft, Keith and Scott Cam.

Dan has some great insights into how they build these incredible architect-designed homes to the highest standard possible in such a short timeframe. All while filming a TV show!

The interior design and styling as well as some of the soaring ceilings and architecture are incredible this year. But the drama has been a focal point of the show in 2021. And Dan says he’s been surprised how dramatic it was while watching the series back along with us.

“I didn’t realise it was this bad. I knew there was certain friction between certain teams. When you watch it back now it is so much bigger than I thought it was. And a lot of teams are really hanging on to certain issues too long throughout the series. You’ve just got to move on sometimes.

“When you’re in ‘the block world’, you’re so caught up in everything. Especially the All Stars, they’ve done it before. They should know to put their energy into the build and try not to get drawn into the drama. But as we’ve seen, they are fully drawn into it and also creating a lot of it. I found it very surprising. You don’t worry about that and just build the best house you can build, because that’s what it’s all about.”

DAN CELEBRATES 10 YEARS ON THE BLOCK

A lot has changed since Dan joined the show as a contestant with his now wife Dani. Back then it was focused more on renovation as well as some building.

“It’s such a different beast. It’s huge. To watch the show grow to what it is now – the production size is just huge. Everything we’re achieving is getting bigger and better each year.

“The thing I’ve noticed the most is what we can do in a week is much more than what we could do before. Probably because we have a lot more suppliers behind us that will drop everything to get something done for us at a moment’s notice.”

And Dan told us just how important design and building standards are to him in his profession, both at Red Door Project and on The Block.

“We’re always patrolling. We don’t stop. And we’re always just watching over and looking at things to make sure it is done to our standard. Keith and I, we’re not there to be their enemies. We’re there to help them make the best houses possible.”

MORE ABOUT OUR PODCAST ‘AT HOME WITH LAUREN KEENAN’

Our award-winning interior design podcast, hosted by Sydney interior stylist Lauren Keenan, is now in its sixth year, helping you with useful advice to help you create a home you love.

Get in touch if you have a topic you want us to talk about on the show. Rate and review the show on Apple Podcasts. And subscribe in your favourite podcast app like Spotify or iHeartRadio so you never miss an episode.

And if you want Lauren to get started on a project in your home, email lauren@laurenkeenan.com.au. It could be building, renovating or just updating your favourite room.

Find out more about the services we offer at Lauren Keenan Home and check out Lauren’s portfolio of work for some inspiration. And thanks for listening!